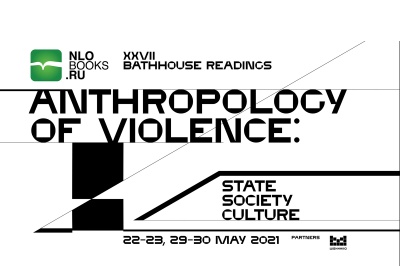 On May 22-23 and 29-30, the “New Literary Observer” journal is holding the 27th International Conference “Bathhouse Readings”. The conference will be held online via Zoom and will be streamed on YouTube. This year’s theme is “Anthropology of Violence: State, Society, and Culture”.

Taking a cue from the fairly recent establishment of this sociocultural anthropology subfield, the conference theme proposes a deeper dive into the Anthropology of Violence and its post-modern concern for state violence in liberal as well as illiberal contexts. In the modern era that bore witness to two world wars, anthropologists first began observing and asking questions about state-sanctioned physical violence, including issues of war, genocide, police brutality, and capital punishment. What is the fundamental nature of state violence and how and when is it deemed culturally appropriate? What kinds of ideas have historically legitimized types of public and private violence and how have relationships to violence evolved to this day? What kinds of interactions exist between the public use of state violence and various kinds of private violence? What is the relationship between traumatic memory and political action in the aftermath of atrocity?

Second, in addition to state violence as a topic of interest for the Anthropology of Violence, the conference seeks to explore notions of symbolic violence, as well. While social violence has been extensively theorized and studied by anthropologists, a greater focus has traditionally been placed on visible, physical violence, and there is work still to be done on forms of everyday, normalized, and/or invisible social violence. Thus, the conference is especially interested in the topics that seek to complicate common understandings of social violence, oppression, and suffering by shedding light on the ways in which social violence suffuses our everyday social experience—often without notice and without an agent who is seen as responsible for the violence. As Neil Whitehead puts it, “committing violence is more than an instrumental way of getting what one wants: it is also very much a discursive practice with symbols and rituals.” Accordingly, papers addressing the issue of symbolic violence might analyze it through the lens of narrative, paying attention to, for example, erasures/distortion of history. Literary and artistic representations of violence are  of keen interest, as well as violence as the subject of performative cultural expression. One of the most important topics are also social media and social violence, including cyber bullying, victim blaming/shaming, coverage and images of death in news media.

In recent years an interdisciplinary array of scholars has wrestled with these questions and participated in debates about violence and its function in society. Such scholars include Frans De Waal, Franz Boas, Nancy Scheper-Hughes, Alexander Hinton, R.B. Ferguson, Michel Foucault, Pierre Bourdieu, and James C. Scott, among others. Still, there remains significant disagreement on whether it is useful or desirable to theorize social violence at all. How useful is it to theorize violence, given the complexity and diversity of cultures and historical circumstances that exist simultaneously? How ethical is it for anthropologists and other scholars to go and observe violence in the field for the sake of theory-building? How can scholars researching the question of violence avoid themselves perpetrating or perpetuating violence through their work?

With these questions in mind, a third goal of the conference is to discuss not only changing theories and new developments in the Anthropology of Violence but also changing approaches to the process of theorizing violence itself. This includes discussion of the inherent interdisciplinarity of the subfield of Anthropology of Violence, and the place of history, biology, political economy, cultural studies and other disciplines within it.

New Literary Observer (NLO) is Russia’s leading interdisciplinary journal engaged in theory, history, and practice of culture in a global intellectual context. Established in 1992, NLO has been dedicated to investigating the current state of the liberal arts and humanities, adapting new intellectual trends to the study of Russian culture, and integrating Russia’s own academic traditions into the global epistemic community. With the ever-evolving trajectory of global academic thought and nascent field of liberal arts in Russia, the journal has continuously widened the scope of its mission.

Evgeny Blinov (Tyumen State University / Gorky Institute of World Literature, Moscow/Tokyo). The Ways of Terror from the Emanation of Virtue to Absolute Evil: The Modern State and the Problem of Legitimating Violence.

Oleg Khlevniuk (Higher School of Economics International Center for the History and Sociology of World War II, Moscow). Who and How Much? Victims of Stalinism in Academic Historiography and Historical Imagination in Contemporary Russia.

Regina Mühlhäuser (Hamburg Foundation for the Advancement of Research and Culture, Germany). Sexual violence in armed conflict: opportunistic acts by individual soldiers or military strategy? The example of the German Wehrmacht in the Soviet Union.

Egor Sokolov (independent researcher, Moscow). “We Had a Period of Time When We Were Afraid to Say that We Could Defend Ourselves”: Soviet Military Strategy in 1930s.

Carola Dietze (Friedrich-Schiller University of Jena, Germany). The Invention of Terrorism in the 19th Century in Europe, Russia and the United States.

Elena Racheva (Oxford University, UK). War without Peace: The Militarization of Russian Society as One of the Outcomes of War in Afghanistan and Chechnya.

Laurie Manchester (Arizona State University, USA). How did Imprisonment in the Gulag Affect Manchurian Russians? A Comparison of the Narratives of Forced and Unforced Repatriates to the U.S.S.R. from Manchuria.

Evgeny Ponomarev (Institute of World Literature of the Russian Academy of Sciences, Moscow). An Anthropology of Violence in Early Soviet Literature.